Fête de la Musique is the largest international live music event in the world, held in 450 cities across the globe on the very same day each year – June 21st The aim of the event is to make music everywhere, to celebrate music and to expose as many people to music as possible. The International Charter is the common link for more than 110 countries who participate in this music event. Musicians and venues donate their time for free, supported by a small army of volunteers, all in the spirit of making and celebrating music Fête de la Musique always provides a performance platform for all people who love making music: whether a professional musician who has been playing for years or an aspiring performer who is looking for a chance to try out their skills.

Come and enjoy live free concerts all along the day in Cape Town at the French Alliance and at the Lutheran church. All styles of music will represented!

At the French Alliance from 12am Clint C Music, Skye, Kenneth Minor and Masidlale String Project, and from 8pm Chillounge Connection and Bongeziwe Mabandla 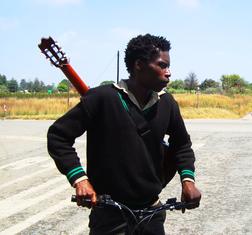 26 year-old guitarist, singer/ songwriter Bongeziwe Mabandla is one of the 10 finalists of the 2011 RFI Discoveries Award and is soon releasing his debut album "UMLILO”, meaning fire : now is the time for Bongeziwe to set the Industry ablaze...

Together with his band, he created a matchless afro-folk, sound, fused with his soulful voice delivering in Xhosa, sometimes in English. Influenced by artists like TRACY CHAPMAN and LAURYN HILL, as well as South African vocalists SIMPHIWE DANA and JABU KHANYILE and Zimbabwean guitarist OLIVER MTUKUDZI, his sound has a rhythmically grass-roots vibe, while fusing elements from traditional Xhosa music, mbaqanga, soul, hip-hop and dub.

At the Lutheran church from 4pm MASIDLALE STRING -P, Carla C and The Cape Flats Tenors

To know the complete scheduling, visit the website:http://www.lafetedelamusic.co.za/

Fête de la Musique is an event of the French season in South Africa, for more information: http://france-southafrica.com/