The French Institute in South Africa (IFAS) is delighted to announce its collaboration with ASSISTEJ South Africa in a range of activities. 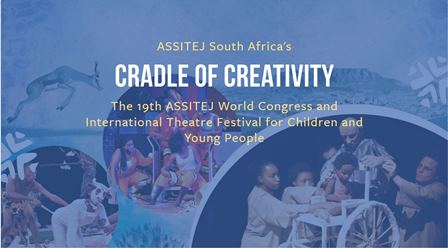 The Cradle of Creativity, 16-27 May, comprises a Festival, a Conference and a World Congress, all dedicated to theatre for young audiences. The multi-layered event is hosted by ASSITEJ South Africa, and will take place in Cape Town at multiple venues. During the Congress, there will be an important participation from Francophone countries. Delegates from Francophone countries will come for the Regional Playwriting Workshop that will take place from the 23rd to the 27th May 2017 in Cape Town, which is organised by ASSITEJ France. To heighten its partnership with ASSITEJ South Africa, the French Institute in South Africa is also bringing a beautiful puppetry show called “Soro et le Grain de Maïs Magique” (Soro and the Lucky Grain of Corn), performed by the company “La vie à pied” from France (Réunion Island).

“Soro et le Grain de Maïs Magique” (Soro and the Lucky Grain of Corn) is a story from a book written by Véronique Tadjo. It is a story about Soro, a little boy who receives a lucky grain of corn from his parents, but when he leaves it on a stone, a bird steals it away. Soro runs everywhere to catch up with the bird and in his journey to find the grain, he meets many friendly animals and people along the way, but he cannot stop for long because he must find his lucky grain of corn. When Soro finally catches up with the bird, he learns that magic is not always where we think it is.

> Suitable for children from 1-6 years old.

More about IFAS: The French Institute of South Africa (IFAS) is a cultural agency of the French Embassy in South Africa. IFAS-Culture organizes artistic events throughout the country all year round. Events organized and supported by IFAS take place in venues and festivals throughout the country, allowing the Institute to establish relationships with various South African partners. As part of its mission, IFAS-Culture encourages cultural diversity and exchanges between South Africa, France and the rest of the African continent by supporting artistic events ranging from contemporary dance, theatre, puppetry and music, to contemporary art exhibitions and literature.

More about ASSISTEJ ASSITEJ is the international association of theatre for children and young audiences, which was founded in Paris, France in 1965 and unites more than 100 countries in its activities. ASSITEJ South Africa is hosting the ASSITEJ World Congress which comes to the African continent for the first time.

Press release from the French Institute in South Africa