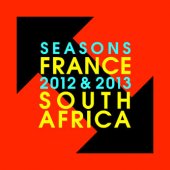 For several years, France has been engaged in a series of reciprocal Seasons with its key international partners (China, Japan, India, Turkey, Russia and Brazil among others). With South Africa, this will be the first time that a sub-Saharan country is involved in the Seasons with France. The goal of these Seasons is to improve mutual understanding and contribute to the diversification of France’s image in South Africa and South Africa’s image in France by emphasizing the modernity and values that the two countries share.

The French Season in South Africa is:

- a festive period : a wide range of over 70 different projects, performances and initiatives are planned across South Africa. Cultural events will be combined with a wide array of events in other fields : innovation, science and technology, higher education, business, tourism, sport, and language with the involvement of many different actors,

- a showcase of the numerous links existing between France and South Africa;

- an opportunity to reinforce a wide range of existing collaborations and to build a lasting legacy for both nations.

Main past events in Cape Town:

From the 11th of July to the 15th of October: Exhibition Rendez vous at the Iziko Museum-South African National Gallery.

The 29th of August : Concert Cécile Verny Quartet at the Hidding Hall.

The 5th and the 11th of September : French Days at CPUT and UCT

The 15th of September : Concert Kill the DJ at the Fiction Club (226 Long street)

From the 10th to the 30th of September: Exhibition Loustal’s Road trip to SA at Alliance française.

And much more events...

Next events in Cape Town:

From the 11th to the 17th of November : TRAVELOGUE (dance)

13 - 14 novembre : Seminar on the Preservation and Promotion of Audiovisual Cultural Heritage in France and South Africa

From the 30th of November to the 26th of May : François Levaillant’s exhibition at Iziko Museum

The South African season in France will take place from May to December 2013.

You can also visit the official website of the seasons: www.france-southafrica.com