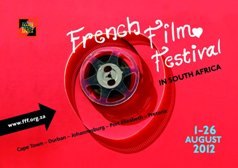 French cinema is rolling! In the past year, films such as Intouchables broke box-office records in France and overseas, The Artist scooped many an award, including 5 Oscars, which is totally unprecedented for a French movie! French films are everywhere, whether they are being projected in regular cinemas across the world, opening or appearing on the lists of award-winners in major international film festivals - respectively38 Witnesses (38 témoins) by Lucas Belvaux and Farewell my queen (Les adieux à la reine) by Benoit Jacquothave opened the Rotterdam and Berlin Film Festivals this year.

This year’s programme includes a medley of the finest films for all tastes and moods ranging from drama to comedy and historical movie, with the presence of French guest starsand glamour opening screenings. The festival also presents a retrospective of films by Claire Denis, whose work is strongly linked with Africa, and a film by prominent South African director, Ramadan Suleman.

To book your tickets : http://www.sterkinekor.com/

Programmation of the festival in Cape Town

Wednesday 1st of August : Openning with Farewell My Queen by Benoît Jacquot

Thursday the 2nd of August:

Friday the 3rd of August:

Saturday the 4th of August:

Sunday the 5th of August:

Cast: Diane Kruger, Léa Seydoux, Virginie Ledoyen. 1789. On the eve of the French Revolution, those living at the Court of Versailles continue to lead carefree, uninhibited lives, far from the growing unrest in Paris. When news of the assault on the Bastille reaches the court’s ears, the nobles flee along with their servants, deserting the palace… But SidonieLaborde, a young reader of the Court who is devoted to the Queen, refuses to believe the rumours. She is certain that under Marie-Antoinette’s protection she will come to no harm.

Cast: Mathieu Demy, Salma Hayek, Géraldine Chaplin Martin lives in Paris with Claire. Their relationship has hit a dead end. When he loses his mother back in California, Martin must return to the city of his childhood to deal with the formalities surrounding his inheritance. In Los Angeles, he’s greeted by Linda, a family friend who offers to help him through the difficult time.

Cast: Louise Bourgouin, Gaspard Proust, Joey Starr Marc Marronnier, book critic by day and society blogger by night, has just divorced Anne. He is convinced that love only lasts 3 years. He has even written an article to prove the fact. But his encounter with Alice will shatter all his convictions.

Cast: ClotildeHesme, GrégoryGadebois, EvelyneDidi A small fishing harbour in Normandy. They have been sent on the same path by an ad... and Angel enters in Tony’s life. Angel is rough and she knows nothing about love... her attempts at seducing him are met with rebuttal.Not like this, not this fast... he cannot believe that she is here for him...

Cast: Catherine Deneuve, Chiara Mastroianni, LudivineSagnier From Paris in the 60’s to London’s modern days, Madeleine and her daughter Vera waltz in and out of the lives of the men they love. But lovecan be light and painful, cheerful and bitter. An elegy to femininity and passion with musical outbursts.

Cast: Mathieu Amalric, Edouard Baer, Chiara Matroianni Set in 1958Tehran, the film chronicles eight days in the life of a celebrated violin player whose beloved instrument is accidentally broken. Unable to find a violin worthy of replacing it, he sinks into depression, and retreats to his bed to await his own death. Slipping into melancholic reverie, he dreams of his past and his children’s futures – as told by the angel of death.

Cast: Valérie Donzelli, Jérémie Elkaïm, Brigitte Sy, Michèle Moretti When Romeo and Juliet meet one evening in a nightclub, the chemistry is as instant and intense as that of their namesakes. The couple fall in love and soon have a child. But when their child is diagnosed with cancer, they come face to face with the full machinery of the disease and its attendant medical horrors. Yet no matter how desperate their journey becomes, the film remains a love story, its quirky upbeat style leavening its dark subject matter.

Cast: Alex Descas, Mati Diop, Nicole Dogué, Grégoire Colin Lionel is a train driver on Paris’s rapid-transit rail network. He has been raising his daughter, Joséphine, alone ever since she was a little girl. She has now grown into a young woman. They live side by side, a little bit like a couple, refusing the advances and cares of others.

Cast: Grégoire Colin, Denis Lavant, Michel Subor A group from the Foreign Legion forgotten, abandoned somewhere in the gulf of Djibouti. Remnants of a ghost army which pays war and mends roads. At Marseille, the ex-warrant officer Galoup reminds him of this happy time, of this well-orchestrated life, of his men, his deer herd. But eventually what he really lost is his commander. His commander he didn’t want to share with a young legionary.

Cast: Michel Subor, BéatriceDalle, Grégoire Colin, Alex Descas Louis Trebor’s journey forms a loop, follows the shape of the earth’s roundness: from the French side of the Jura along the Swiss border, Geneva to Pusan in South Korea, right to Oceania.Louis Trebor lives hidden away. He feels spied upon.

Cast: Sophie Mgcina, Kurt Egelhof, MpumiMalatsi, Pamela Nomvete Johannesburg is in a state of euphoria two years after the first democratic elections. Here Thandeka, a young black journalist, lives in fear of her country’s past. She’s so troubled that she can’t work, and her relationship with Mangi, her 13-year-old, profoundly deaf daughter, goes from bad to worse.

Event of the French Season in South Africa www.france-southafrica.com